Se7en Loses His Wallet and Needs Everyone’s Help to Find it! 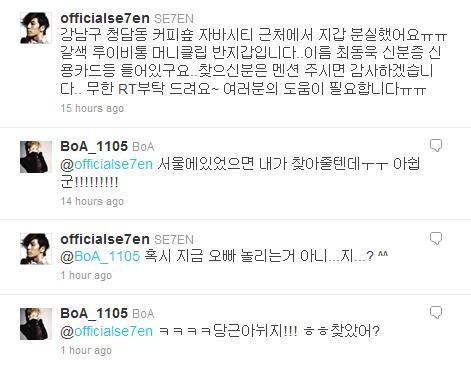 Se7en has lost his wallet… and he wants YOU to help him find it! The singer misplaced his wallet in a Seoul cafe, then took to his Twitter account to ask if anyone had any leads. Hey, when you have thousands of followers, there’s certainly a chance that one of them might know where it is, right?

Se7en posted: “I lost my wallet near the Cheongdam-dong area near a cafe called Java City ㅠㅠ It’s a brown Louis Vuitton money clip wallet… It has credit cards and my identification card with the name Choi Dong-wook… I will be grateful to whoever finds it. I ask for anyone to re-Tweet if they do! I need everyone’s help~ㅠㅠ.”

He then offered a reward that probably caused hundreds of girls to stampede to Cheongdam-dong in a mass wallet-hunting expedition: “I will hold a special one-on-one fan meeting for whoever finds my wallet. If it is a guy or a girl who doesn’t like me… then I’ll just say thanks!!”

Even BoA perked up at this news, replying to his Tweet with, “I would find it for you if I was in Seoul! Too bad!!!!!” Unfortunately, the songstress is currently in the United States filming her upcoming dance movie. Se7en replied, “You’re making fun of me now, right? ^^”

This entry was posted on January 22, 2011 by redtofu. It was filed under News, Solo and was tagged with Se7en.