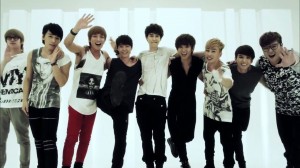 Arirang make a feature on Super Junior’s repackage album shooting set. They also played during ‘No Other’ filming set! ‘A short Journey’ was written as a special our fans, while thinking about Kang In was going through. Let’s check out video for more info about Super Junior ‘No Other’ Filming set. Check it out now!

This entry was posted on August 3, 2010 by hjlufaa. It was filed under Behind The Scene, Boy Band, Videos and was tagged with Super Junior.